Fragster Fundamentals are your entry into the world of esports! With beginner-friendly guides and tips for advanced learners, we will help you better understand competitive gaming and your favorite titles.


The term “GSL” shouldn’t strike a bell for most esports enthusiasts. But this tournament format actually appears in almost all esports, and to this very day, it is still one of the easiest means to conduct an exciting Group Stage. In this Fragster Fundamentals edition, we’ll be taking a look a the history of the GSL format!

Who still remembers the Global StarCraft II League? While this esport has somewhat been forgotten in the grand picture, the league used to be one of the biggest circuits on the planet. The tournament format used there got its name from GSL, as it was the first to utilize it. But what actually is the GSL format?

Four teams are put into one group. Two Opening Matches kick things off. Winners and losers will emerge from these matches. The winning sides will go on to the Winners’ Match and whoever succeeds there will advance to the playoffs. The losing sides from the Opening Matches enter the Losers’ Match (also called Elimination Match). Whoever fails there, is out of the tournament. To conclude things, there is one last match between the winning team from the Losers’ Match and the losing team from the Winners’ Match. This commonly referred to as Consolidation Match, Tiebreaker Match, or simply the Decider, as it decides on the second and last team to enter the playoffs from that group. 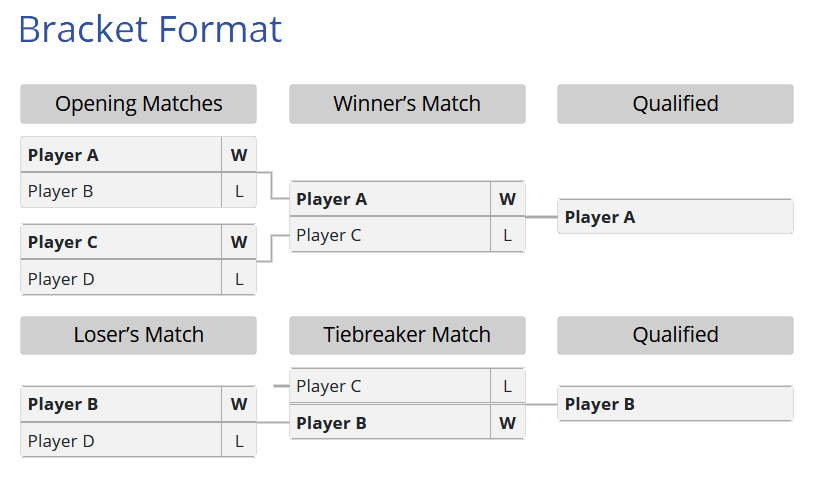 The GSL format from the Global StarCraft II League (via Liquipedia)

WHY IS GSL SO POPULAR?

The answer is simple: The format is structured to be easily and clearly understood, players and fans will almost intuitively find their way around it. Four teams only need five matches, which is very little compared to Round Robin. The amount of matches required scales linearly with the amount of teams in attendance. For eight participants, it’s just five games each in two groups. 16 teams only need 20 matches overall. A full Round Robin bracket with this many teams would need more than 100 matches!

The storylines are compact and easily manageable. Fans never lose track, as the amount of opponents remains small and their Group Stage journey only involves a select few encounters with other teams. This format is also a great value for organizers looking to squeeze in a small group stage before their playoffs commence. Every team gets two separate chances to qualify. Different seeds can be handed out to the two partipants who advance, depending on whether they made it through the Winners’ Match or through the Consolidation Match later on.

IS GSL THE BEST FORMAT?

This question is a hotly debated one. We have already laid out a lot of advantages and there’s a multitude of reasons as to why GSL should be utilized in many scenarios. Counter-Strike has done so for many years and still does. The compactness and storylines are a great bonus for organizers. Matches have a clear value attached to them. The Winner’s Matches are about making the playoffs. The Losers’ Matches are about staying alive in the tournament.

But the GSL format is by no means perfect. The Swiss System, which Valve has famously implemented for all CSGO Majors since 2017, offers the teams three chances to make it. So if they lose three matches in total, they’re out. While seeding does play a role, even if favorites have to face each other, the format makes sure that both teams still have a chance and don’t need to worry about facing off again. By splitting up winners and losers into different pools, Swiss usually forms a hacking order all by itself.

And if the number of matches is of no concern, then Round Robin obviously has lots of advantages. All teams face off against each other – there’s just no better way to establish a perfect ranking! So GSL has it’s up- and downsides, which have to be carefully weighed up. But sometimes, the GSL concept goes horribly wrong. Tournaments like ESL One Cologne 2016 have shown what happens when teams are only put into groups of four.

THE GSL DISASTER AT ESL ONE COLOGNE 2016

Image the best teams at a tournament were to all end up in one group. Even worse – the group is GSL! So for the favorites, this means that only two of them can actually make the playoffs. If something like this happens at a Major tournament, there’s bound to be some community anger. 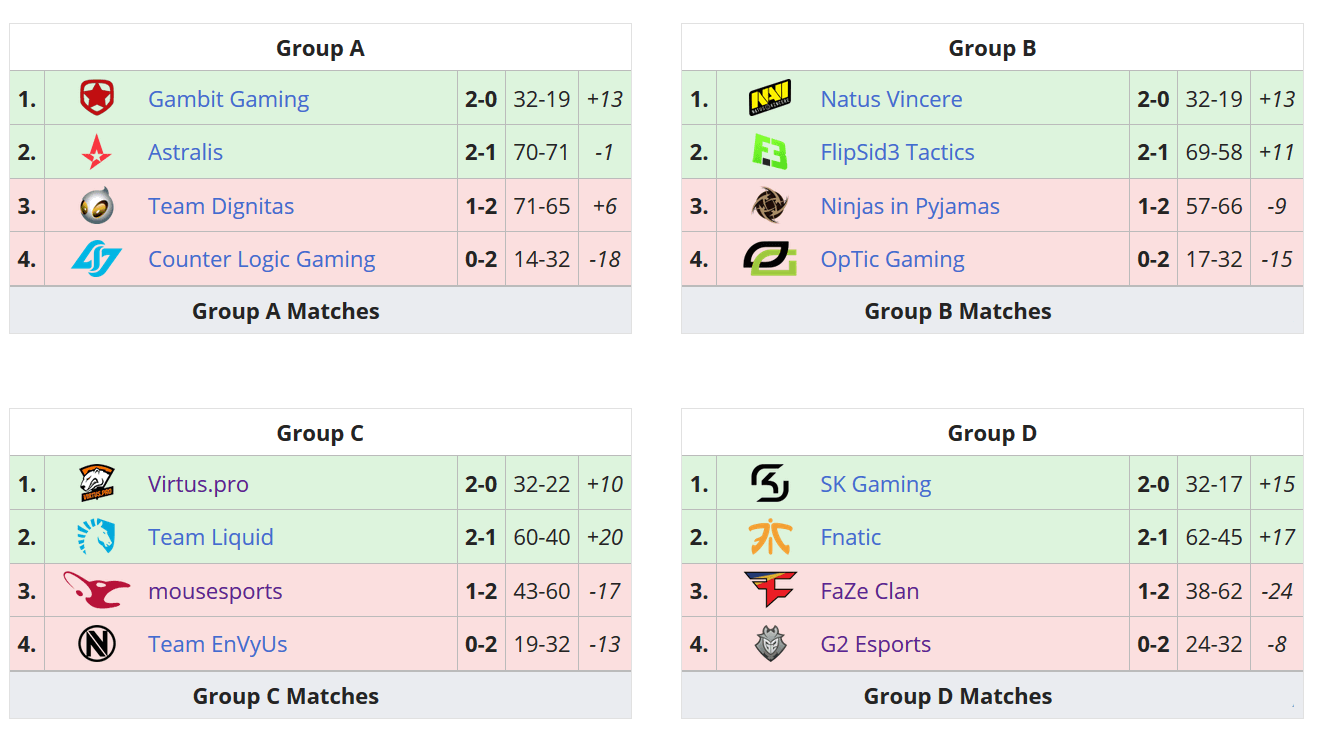 Spotting anything weird in Group D? (via Liquipedia)

So to understand the problem, we need to look back to June 2016. Sure, Gambit and Astralis are frontrunners now, just like Team Liquid and mousesports. But back then, right before ESL One Cologne, SK, Fnatic, and G2 were the Top 3 teams according to the HLTV world ranking. And would you look at this: All three in one group! SK were victorious at the MLG Major in Columbus, Fnatic had just won IEM Katowice 2016, and G2 had claimed the trophy at the ECS Season 1 Finals. All three were put into one group despite being obvious favorites.

So how could it come to this? The issue should be clear for everyone to see: Seeding. ESL had unfortunately not done their jobs very well and failed to check whether the average level was similar in each group. This resulted in a fatal imbalance: Group D had an average HLTV rank of 5.75, whereas the average of Group A was 16.75 – almost double as much! Valve answered by turning the entire Major system upside down and implementing the Swiss Systen, replacing GSL starting with the ELEAGUE Major: Atlanta 2017.

HOW GSL WAS IMPROVED OVER THE YEARS

One obvious trick to make GSL better is seeding. But players and fans also like to criticize that teams can exit the tournament much too quickly. In the first few years in particular, organizers preferred Best-of-One duels for their Opening and Losers’ Matches. So a participant could already see themselves out of the event after one day and just two maps. But the issue was easy to fix: Best-of-Ones for the Opening Matches, Best-of-Threes for the remainder of the bracket. 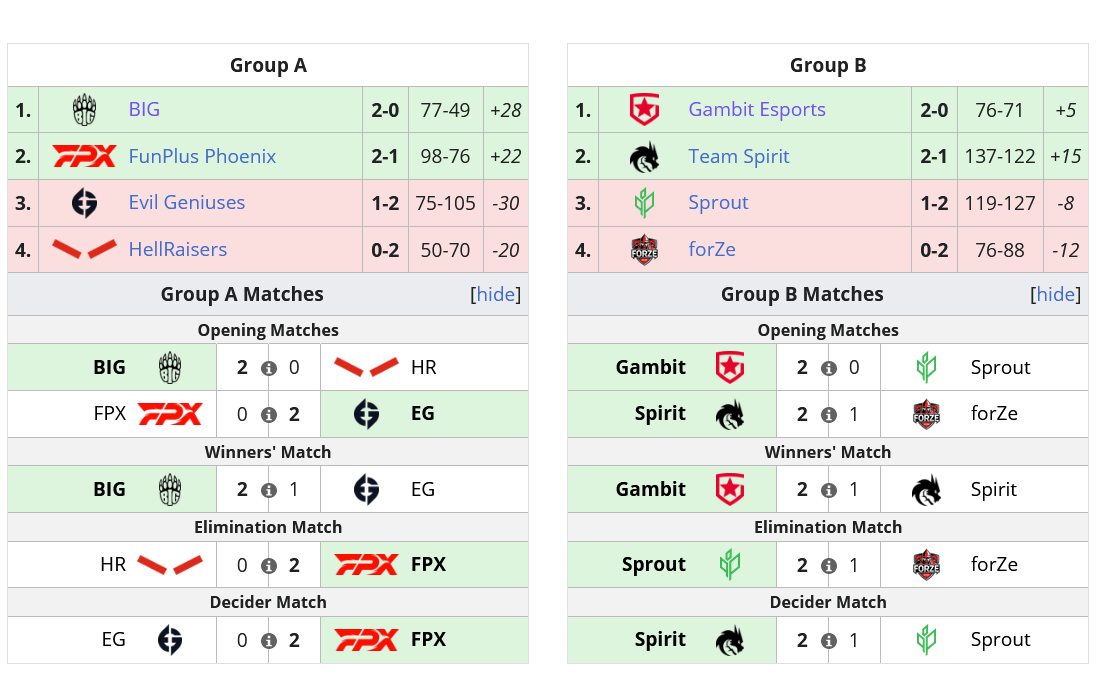 DreamHack even uses Bo3 matches across the board (via Liquipedia, DH Open January 2021)

So with proper seeding and enough maps, the GSL format was be made so much better. It’s still being used today. The Global StarCraft II League has obviously stuck by it. But CSGO also makes use of it, even though the Major tournaments have long discarded it. Dota 2 seems to almost exclusively work with Round Robin, but WarCraft III has joined as a recent GSL fan.

Our Fragster Fundamentals series will return with more esports guides soon! We’ve already touched on the Swiss System, which is an interesting approach to Group Stages that we want to analyze further. So if this is interesting to you and you want to discuss the up- and downsides of various tournament formats with us, you should bookmark Fragster right now and come back soon!