Guide: The Round Robin Format

Fragster Fundamentals are your entry into the world of esports! With beginner-friendly guides and tips for advanced learners, we will help you better understand competitive gaming and your favorite titles.

If you’ve ended up on our page, changes are you’ve already watched quite a few esports tournaments. Maybe you know most of the names and terms already. However, there are new and inexperienced esports enthusiasts who need some extra help. Fragster is supposed to be a community for these folks as well! We start our Fundamentals series off with one of the most prominent tournament formats, Round Robin.

The principle is as easy as it gets. In a league, X teams all face off against each other. So each and every team has to play out X – 1 matches and meet every possible opponent. Provided there are no double encounters, the Round Robin phase should play out a total of (X * (X -1)) / 2 matches. Too many numbers? Okay, we get it, it’s going to be a little more exciting in just a few seconds!

So if every roster has to face off against every other roster, we get quite a few match-ups. For this reason, Round Robin phases are being used in leagues and are stretched over the course of weeks or even months. This way, it doesn’t get boring or repetitive, and the tournament organizers get so much of the sweet, sweet broadcast time they love so dearly.

WHERE CAN I SEE ROUND ROBIN IN ACTION?

Almost all bigger leagues are using the format. The League of Legends scene wouldn’t be able to survive without it! The LEC, LCS, LPL, and LCK are all doing it. The same principle holds true for Rainbow Six: Siege, but some regular tournaments are also counting on Round Robin. Before going into playoffs, The International seeds its teams through a massive Group Phase in which all teams meet. You can’t really do it any better, as each and every team gets to prove that they’re better than the rest. On top of that, fans can get a head-to-head between the individual contestants.

The Round Robin bracket back at The International 2019 (via Liquipedia)

Counter-Strike has always struggled with the format. While there are some tournaments that make use of the Round Robin, most events still feature the traditional playoffs brackets and GSL groups. But OWL, for instance, lets all the teams loose and brawl between each other before they’re transitioning to the Finals of the league.

WHY IS ROUND ROBIN SO USEFUL?

We can answer this question with another question: Do you want to know which teams are really better than the others? You can determine accurate rankings only if all rosters face off and there is a result for every possible match-up.

Sure, the Single Elimination bracket should suffice to bring the best team to the top. But there’s no guarantee that the #2 will also make it to the Grand Finals. What if the two frontrunners were to face off in the Quarter- or Semi Finals already? Then the tournament would conclude with an arguably less exciting Grand Finals. Good seeding can help remedy this issue – but that’s exactly what Round Robin is for!

Of course we need to see this from the organizers’ perspective as well. ESL, DreamHack and the likes want to have broadcasting hours first and foremost. Longer run-time means more ads. This in turn appeals to advertisers and sponsors. So we’re talking about actual hard cash here. Still, the Round Robin format isn’t suited for all tournament purposes.

Sometimes it has to be short. A weekend tournament can’t afford to play out 50 matches beforehand. And that’s exactly where the issues lie. While Round Robin (ideally) produces a perfect representation of the teams’ hacking order, it requires a lot of matches to complete. Four GSL groups (with 16 teams total) can be played out in three or four days’ time – even with Best of Three matches! Round Robin would need a whopping 120 matches! 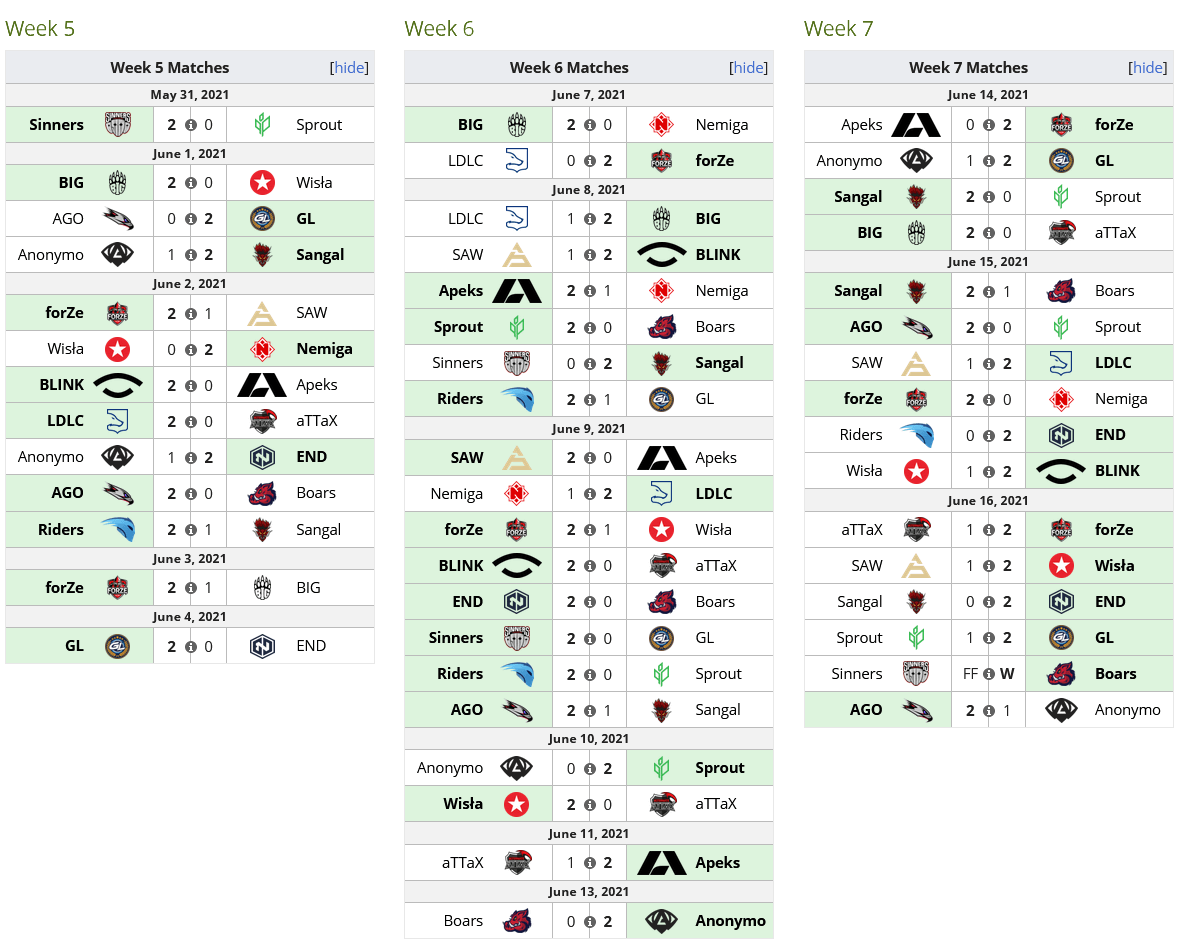 Talking about lots of matches… this is what three weeks of ESEA Premier look like! (via Liquipedia)

ESEA Premier and Advanced take place across months at a time. Matches can play out at the same time, no issues there. In such cases, the large number of games is something positive – or at least it doesn’t become an problem. Of course some organizers approach the format in a different way. Few tournaments play out brackets on such a scale. If you were to split the 16 teams into groups of two, you would end up with 56 matches.

So it appears as though Round Robin has up- and downsides. It’s completely down to the tournament whether the format makes sens or not. Do you want to construct the perfect bracket and achieve perfect seeding? Or do you want to keep your tournament short and maybe even keep some of the match-ups “fresh” for the playoffs?

Fragster Fundamentals will continue with more tournament features soon. We’ve already touched on some brackets and systems in this feature that are being used for esports events all around the globe. So if you’re looking to learn more about Single Elimination or GSL, you should set a bookmark for Fragster right now!