The Street Fighter V Winter Update has just been unveiled and, needless to say, there’s a lot of stuff for us to go over! Perhaps most surprisingly, however, was the introduction of Eleven, a bonus DLC character that seemingly came out of nowhere! Alongside this nifty little surprise, we’ve gotten a more in-depth look into Dan Hibiki, a brand-new mechanic called V-Shift, a short glimpse of Oro’s Tengu Stone move, and a bunch of other stuff as well!

First of all, we need to go over the latest addition to Street Fighter 5’s ever-growing character roster: Eleven! As already mentioned, Eleven is literally a bonus DLC fighter and will be released alongside Dan on February 22nd. Upon locking him in, he’ll take the form of a random fighter you already own in SFV. In addition, his V-Skill and V-Trigger will also be selected randomly — you don’t have any control whatsoever. He’s unlike the random select option because he’ll take his form upon loading in battle, so no one (neither you nor your opponent) will have a clue which fighter he’ll mimic until you get to the loading screen.

Eleven will come as a package deal with the Street Fighter V’s Season 5 Character and Premium Passes ($24.99 for the former, and $39.99 for the latter). Both of these will include all five upcoming DLC characters as well (of which only four have been revealed thus far). The more expensive option will come with 26 unique costumes, two additional stages, eight titles, 100,000 Fight Money, and additional character colours. 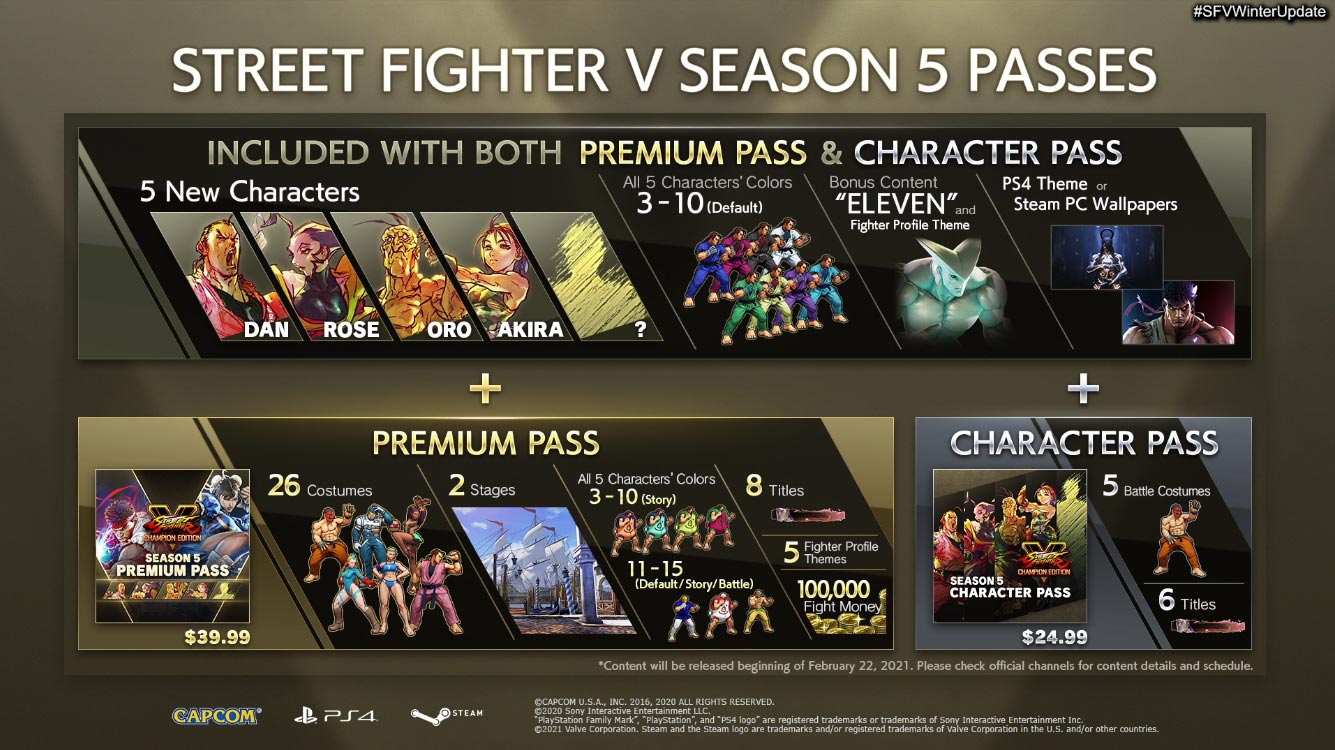 The February 22nd update will also include a brand-new defensive mechanic called “V-Shift.” As to what it does and how, we’ll directly quote Capcom:

“It can be executed at virtually any time in a match at the cost of one bar of V-Gauge and if timed correctly, will allow you to execute a fully invincible back-dash that slows down time for a short period and allows you to plan your next move against to counter your opponent’s attack.”

Even better, this move is invincible to throws so it’s an insanely effective option for a myriad of situations. Finally, if you successfully time your V-Shift, you’ll automatically regain half of your used V-Gauge bar, so there’s a bit of a reward there as well. You can read more about this peculiar new mechanic by clicking here!

It’s crazy to think that Street Fighter V actually came out five whole years ago. Not only is it a testament to the passage of time, but it’s also proof that Capcom have made yet another exceptional entry in a series beloved by so many gamers across the globe. And sure, it definitely wasn’t perfect right from the very get-go, but it got there eventually (in no small part because of numerous updates and post-launch adjustments). Even better, we’re still getting continued support and fan favorite fighters through DLC! And even though the next instalment is right around the corner, it’s fair to say that Street Fighter V is still more than sufficient for those looking to duke it out one versus one!

Finally, if you didn’t manage to catch the official Winter Update livestream, you can do so down below: