The Snapdragon 8cx Gen 3 is the very first mobile chipset for Windows computers manufactured on a 5nm process node and, frankly, it could be a pretty big deal!

ARM chipsets and Windows never really went hand in hand (for a wide variety of reasons). The technology simply wasn’t advanced enough and, perhaps more importantly, Microsoft never really provided the necessary software support. We still don’t know whether it was just sheer unwillingness or a severe lack of competence. Or, perhaps, both.

It is a gargantuan challenge, to be fair, but it is by no means an insurmountable one — Apple, for instance, delivered on their promise and have, in fact, even exceed expectations. Once their M1 SoC hit the market, it became painfully clear just how outdated all other x86 solutions really were. Well, at least for everyday tasks.

So it should really come as no surprise that Qualcomm wants another go at it after dropping the ball (twice). Fortunately, it seems that they’ll finally be able to “stick the landing!” 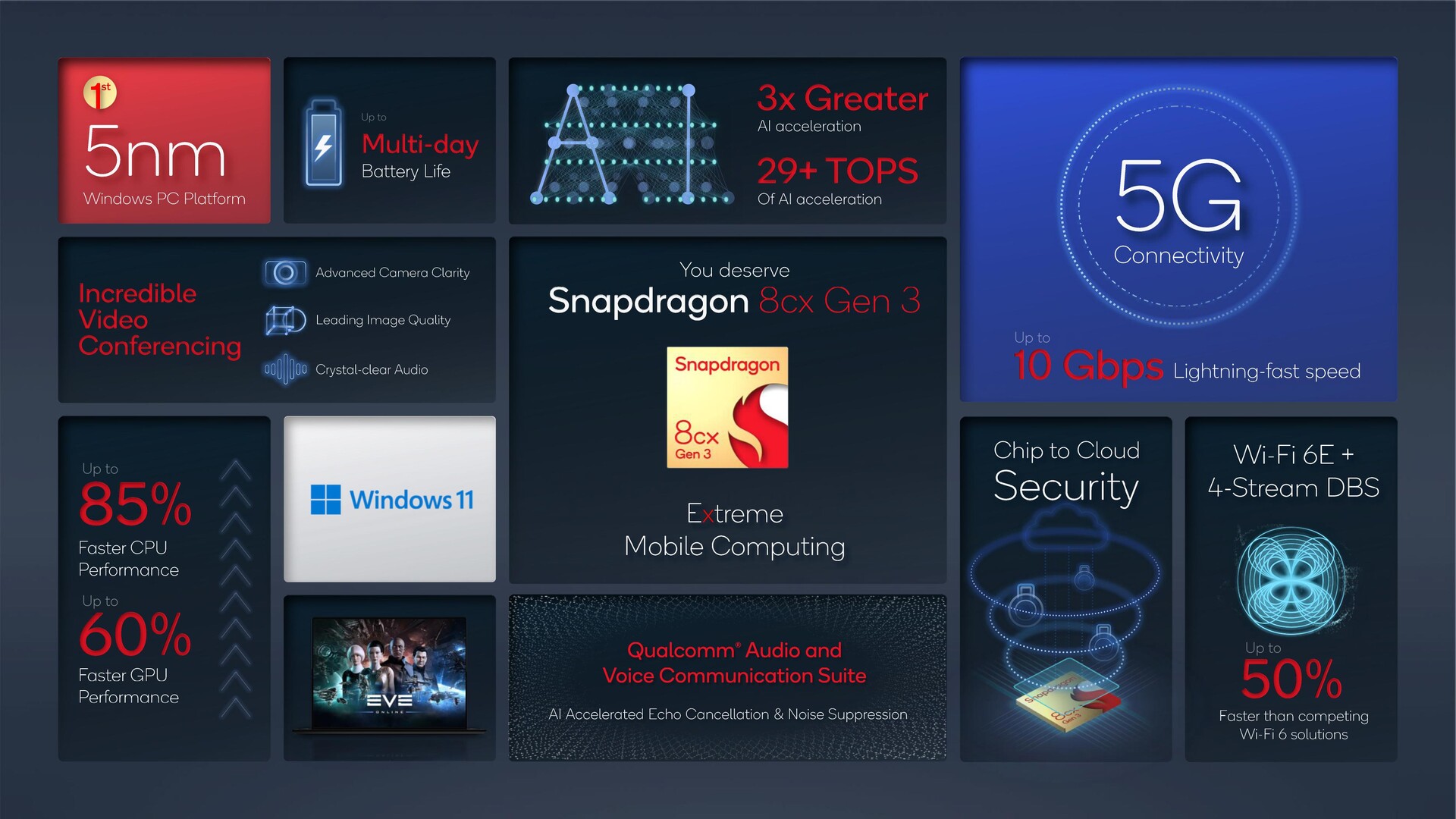 The 5nm process node brings with it more power and higher efficiency — a stellar combination that’ll no doubt make these devices a lot more alluring than their predecessors. The Snapdragon 8cx Gen 3 is about 85% faster in CPU and 60% faster in GPU performance. This is a very respectable increase in power, but it still remains to be seen just how well it’ll translate to real world use.

We’re getting four Cortex-X1 Prime cores (2.9Ghz) and four Cortex-A78 cores running at 2.4Ghz under full load. The CPU can clock down to a measly 0.7Ghz in its idle state which should no doubt result in great battery life and even greater standby time.

There’s built-in 5G support thanks to Qualcomm’s X65 modem (up to 10 Gbps), Wi-Fi 6E, and a “multi-layered security infrastructure.” All in all, these are very respectable, industry-leading connectivity options, but they won’t matter much if Qualcomm doesn’t deliver on the performance front.

Now, just because it has an eight-core CPU doesn’t mean it’ll impress when it comes to day-to-day use and somewhat demanding workloads. Big numbers and fancy nomenclature mean nothing if they don’t result in a fluid user experience.

With that being said, Qualcomm is well aware of its previous mistakes and has surely made the right corrections. Or that’s our hope, at least. We’d be remiss if we didn’t say that all of this sounds mighty intriguing on paper, but we’ve been burned by Windows on ARM before, so we’ll reserve judgement until we see this chipset in action.

Fortunately, we won’t have to wait long as the first 8cx Gen 3-equipped laptops are scheduled to hit the market in H1 2022!