Riven will officially join the ever-growing Legends of Runeterra champion roster! Of course, we knew this was coming, but seeing her in action is truly something else! The way she synergizes with the recently showcased Reforge keyword is quite fascinating, but also insanely powerful. So, as always, let’s take a closer look at her strengths and weaknesses to better understand what she’ll bring to the table!

Also, if you haven’t caught any our recent coverage, make sure to do so before heading down below as things will make a lot more sense!

Reforge the blade. Redeem the past. pic.twitter.com/SlY7zlzbg2

“Riven” is a 3 mana champion from Noxus with 3 | 4. Once you gain an attack token, a Reforge effect will automatically activate. To level Riven up, she’ll need to see “Blade of the Exile” in your hand. That’s it. Overall, she’s not particularly powerful in her primary form, but she’s far from weak. The most important thing, as far as we can gather, is empowering her with Blade fragments. So a 3 | 4 champion, in this case, can easily become a whole lot more powerful in a split second.

Once she levels up, she’ll improve to 4 | 5 and retain the Reforge passive while also getting another one. And this, frankly, is the real kicker. Whenever Riven’s power is increased for the first time each round, it’ll increase by twice as much. In other words, if you cast a “Riven’s Weapon Hilt” (for example) and grant her +2, that’ll instantly become +4. You get the drift. This, in a deck that’s built around empowering units, is absolutely huge. Casting “Blade of the Exile,” therefore, will grant Riven +4 along with Overwhelm and Quick Attack — all for just three mana. Talk about a good deal!

“Sharpened Resolve” is a 3 mana Burst spell from Noxus that’ll give an ally unit +3 | +2 for the remainder of the round. Perfect for topping Riven up after a skirmish!

“Survival Skills” is a 5 mana Slow spell from Noxus. Once activated, allies can’t drop below 1 health for the remainder of the round. If you happen to discard it, its effect will still apply although just for your strongest unit. Overall, yet another insanely powerful mid/late game card that’ll ensure a winning trade. Heck, maybe that’s even an understatement! Five mana isn’t all that much and you can even eke out its effect (to a certain degree) for free if you can discard it at the right time. If you happen to have a populated board, playing this spell can practically ensure you an OTK, either in the turn you play it or in the very next one. 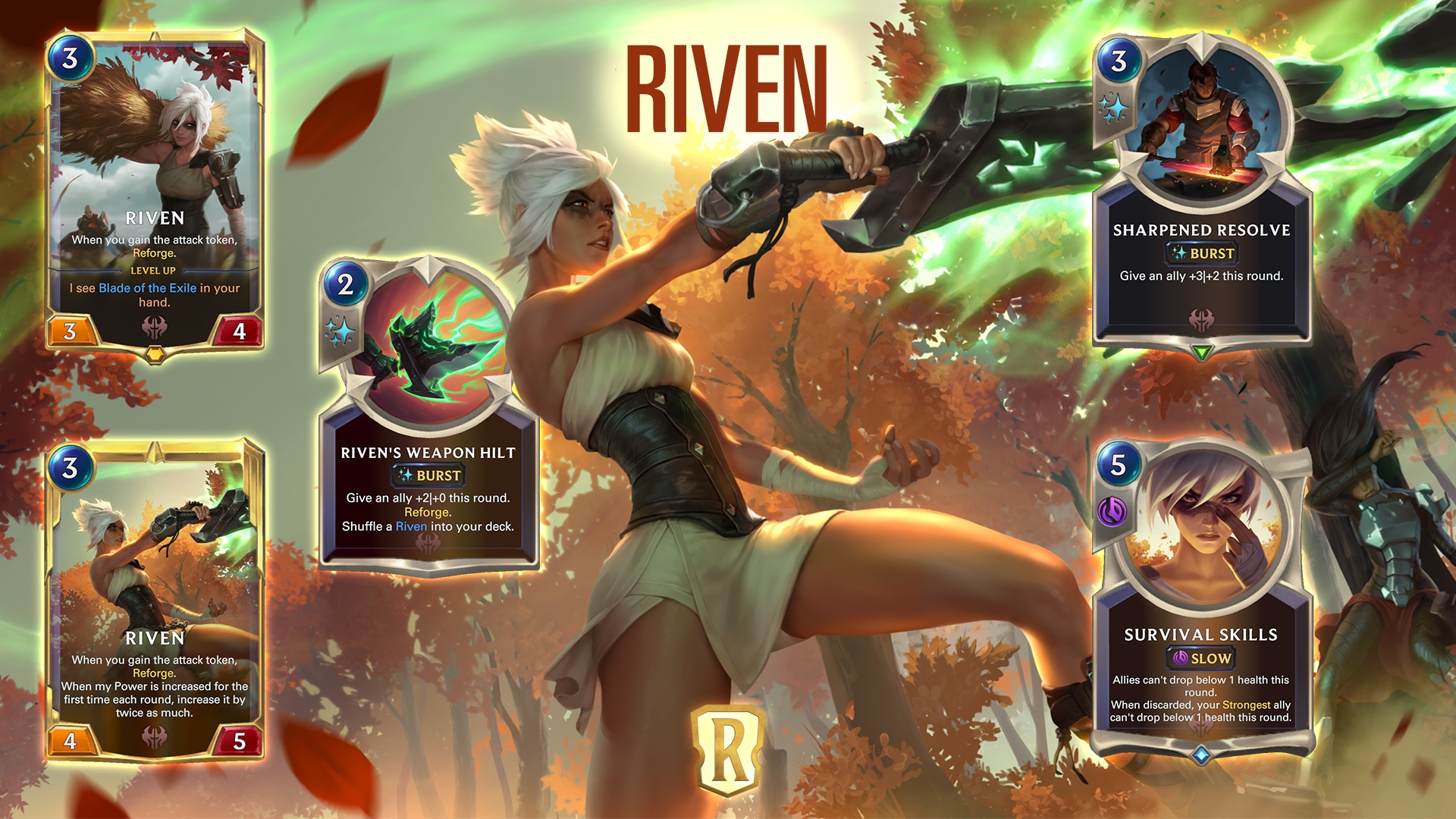 Quite a powerful release, all things considered…

Overall, while it’s still too early to predict anything with confidence, it seems like Riven will enter Legends of Runeterra in quite bombastic fashion! We still can’t talk about any potential synergies (although that Viktor one seems mighty potent), but one thing is for certain: Noxus-based decks will Riven will skyrocket in both popularity and effectiveness.

Either way, the Cosmic Creation set is scheduled to drop on December 16th, so make sure to log in and queue up as these exciting new cards won’t come cheap! And, as always, we’ll be back with post-patch coverage!