Five brand-new cards from Ionia have just been revealed (alongside an equally interesting keyword), effectively paving the way for Irelia! We’re still not entirely sure how effective these cards will be upon release, but there’s ample potential, that’s for sure.

Before we delve any deeper into the nitty-gritty, we first need to go over “Blade Dance” — a bespoke keyword and the driving force behind all Irelia-based deck going forward! 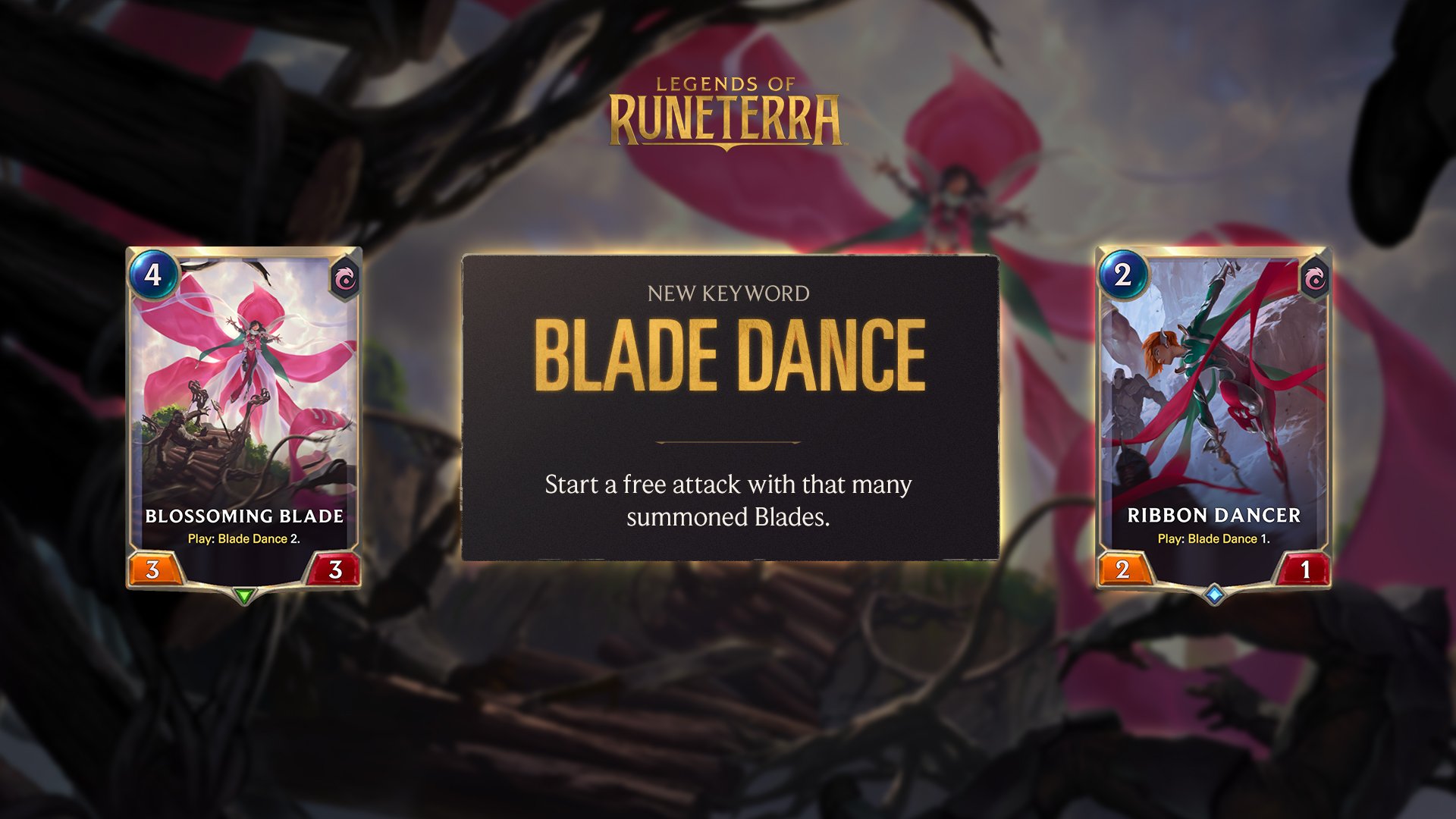 An interesting addition to the game, no doubt!

Don’t let the simple nature of this keyword fool you — it’s deceptively powerful and will surely carve out a place for itself within the upcoming LoR meta. Whenever this mechanic is proc’d, you’ll get a “Blade” with 1 | 1 with which you’ll be able to attack any opposing unit or the enemy Nexus if there’s nothing to protect it. Now, 1 | 1 might not be the most intimidating stat line, but it’s far from a negligible one. Plus, if you have multiple “Blades” (and you often will) they’ll definitely leave a mark.

These blades can also be used to, say, level up Lucian, but only if they’re used to attack opposing units instead of the enemy Nexus. The same applies to Miss Fortune, Azir, and even Quinn (in varying ways), so while “Blade Dance” might seem basic at first glance, it’ll surely find a myriad of use-case scenarios.

“Syncopation” is a 2 mana Burst spell that’ll allow you to swap two allied units. This, for lack of a better term, is staggeringly overpowered. And we don’t necessarily mean it in a bad way (not yet, at least). The number of possibilities and use-case scenarios for “Syncopation” is seemingly endless, and at just 2 mana, it’s bound to become a staple in all Ionian decks (and some others, probably). Most folks online are raving about this one card and, well, there’s a good reason why.

“Coastal Defender” is a 4 mana unit with 2 | 6. Once you summon another ally, “Coastal Defender” will gain +2 | 0 for the rest of the round. Now, on paper, this doesn’t sound all that impressive. But you shouldn’t forget that “Blades” count as allies as well. In other words, if you get the ball rolling, “Coastal Defender” can gain a metric ton of damage if you summon enough units in quick succession. So don’t let its initial damage numbers fool you as he’ll always have at least 4 if not even 6 to work with. In that scenario, he’s no longer a negligible obstacle but rather a veritable threat!

“Blossoming Blade” is a 4 mana unit with 3 | 3 and a Play effect. Once summoned, it’ll proc “Blade Dance” twice.

And last but certainly not least, we have a frightening Ionian behemoth!

“Zinneia, Steel Crescendo” is an 8 mana unit with 3 | 5 along with Elusive and a Play passive. Once summoned, she’ll proc “Blade Dance.” Moreover, “Zinneia” will automatically attack whenever “Blade Dance” is proc’d. That last bit is incredibly important and, potentially, downright OP. If future Ionian decks can have ample “Blade” generation, “Zinneia” will undoubtedly become a force to be reckoned with. She can potentially attack a dozen of times if you can summon a slew of “Blades” in succession, and with that Elusive keyword your opponent probably won’t be able to block much, if at all. 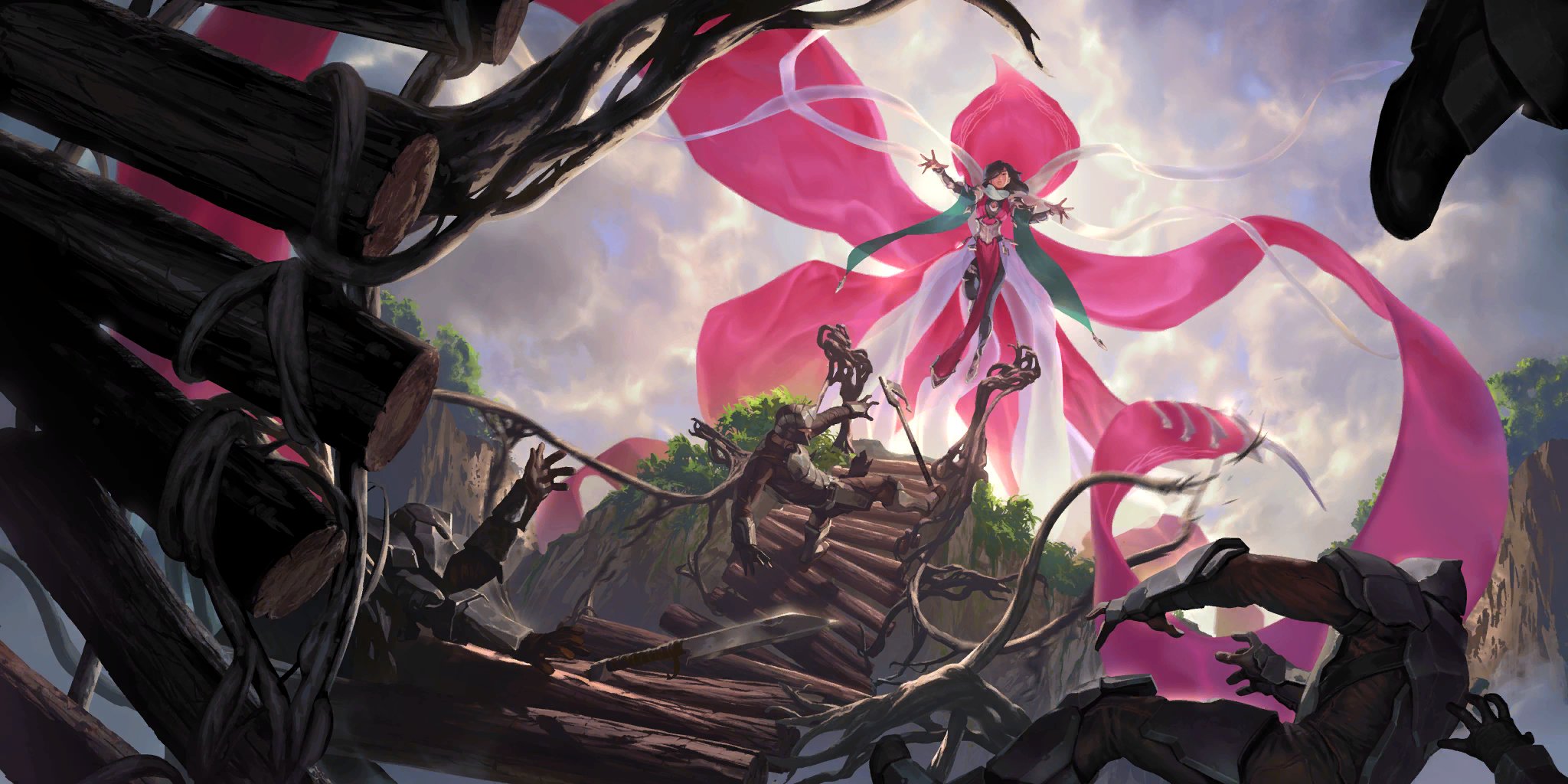 Mind-blowing splash art, as per usual!

This is quite an interesting batch of cards, all things considered. We finally know what “Blade Dance” actually means, and the only thing left is for Irelia to stick the proverbial landing. It’s still impossible to predict whether or not she’ll be viable enough to push Ionian decks into the mainstream, but the potential is certainly there.

In any case, “Guardians of the Ancient” is shaping up to be quite an interesting expansion, to say the least!