The upcoming Legends of Runeterra expansion Guardians of the Ancient has now been made official! And boy is it good to once again be in the midst of spoiler season! Unfortunately, this upcoming set will only contain three champions. That’s not exactly a mind-blowing number, but it’s not half-bad either seeing how Empires of the Ascended came with nine.

The three champions we’re getting have also been confirmed: Zilean, Irelia, and Malphite will join the fray on May 5th, although we still don’t know how powerful they’ll be upon release.

This also means that, based on recent leaks, Pyke and Ekko are coming at the very tail end of the season (perhaps even Rek’Sai). In any case, before we delve any deeper into the nitty-gritty, make sure to watch the official announcement trailer — it definitely sets the stage for what’s to come!

Legends of Runeterra | Guardians of the Ancient Expansion

This upcoming expansion will be accompanied with 42 brand new cards and three champions, all of whom have been showcased in the cinematic above. We’re bound to get a bunch of new landmarks as well, most of which will probably be tied to Targon and Malphite. How big of an impact these cards will end up making still remains to be seen, but the potential is certainly there! 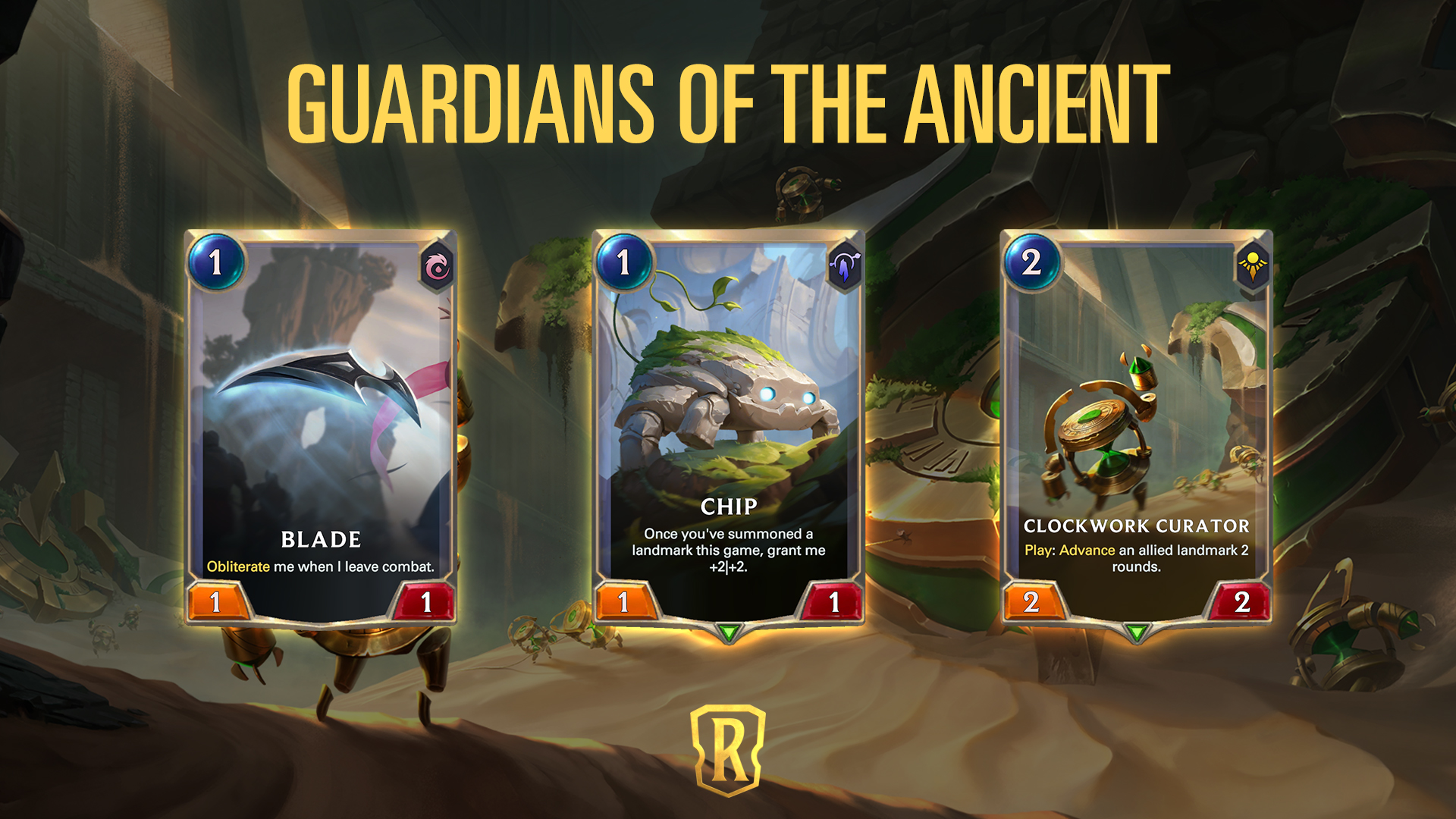 New Guardians of the Ancient Cards

What would an official reveal be without a couple of cards for us to sink our teeth into? This first batch (if three cards can even be labeled in such a way) isn’t all that exciting, but think of it more as a foretaste of what’s to come!

“Blade” is a 1 mana unit from Ionia with 1 | 1 that’ll be obliterated once it leaves combat.

“Chip” is a 1 mana unit from Targon with 1 | 1. If you’ve summoned a landmark at any point during the game, this unit will gain +2 | +2. Seeing how any Malphite-based deck will surely be based on landmarks, “Chip” will almost always have 3 | 3 to work with, making it quite a formidable unit.

“Clockwork Curator” is a 2 mana unit from Shurima with 2 | 2. Once it is brought onto the board, all allied landmarks will advance 2 rounds. Quite a nifty effect, you’ll probably agree.

These three (relatively feeble) units are obviously tied to their respective regions and, by proxy, the three upcoming champions. “Clockwork Curator,” specifically, is bound to see a lot of play as it synergizes greatly not just with Zilean’s presumed powers but also with Shurima (and its most potent win conditions) as a whole.

We still can’t predict anything with confidence but it seems that the writing’s already on the wall. Irelia is obviously combat-focused, Malphite is supposed to grow and become empowered in some way, shape, or form (probably through landmarks), and Zilean’s primary goal is to speed things up and keep his board afloat, almost certainly as a supplement to, say, Azir.

All things considered, there’s quite a lot to look forward to! Riot will unveil new cards each day up until May 5th, so we’ll be back with more coverage before you know it!