Intel’s entry-level Core i3-12100 processor has garnered quite a lot of attention and, well, there’s a good reason why: all signs are pointing towards it being an absolute price-to-performance champ!

The best and most potent Alder Lake CPUs are obviously the most alluring, but the reality of it all is that most folks simply don’t need that much power. And, well, that’s especially true for gaming seeing how most of today’s AAA titles are incapable of harnessing more than four CPU cores and are heavily GPU-bound. You will get a slight increase in performance the higher you go up the product line-up, but you’ll reach a point of diminishing returns far sooner than you’d expect.

That’s why the i3-12100 is so darn interesting: it’s the sweet spot for most people and won’t require them to sell an arm and a leg so as to acquire it. Better yet, it’s the latest and most advanced architecture from Intel, has DDR5 support (PCIe Gen 5, too), and is as future-proof as it gets. That’s a darn good deal, which is quite surprising seeing how it’s coming from Intel — a company whose products rarely offered much “bang for the buck.”

But we digress. The important thing is that Hong Kong-based publication XFastest has managed to get their hands on the upcoming Core i3-12100 and has put it through its paces. The first initial results are beyond promising, so if you’ve been looking to upgrade — and are partial to “team blue” — you definitely have a reason to get excited! 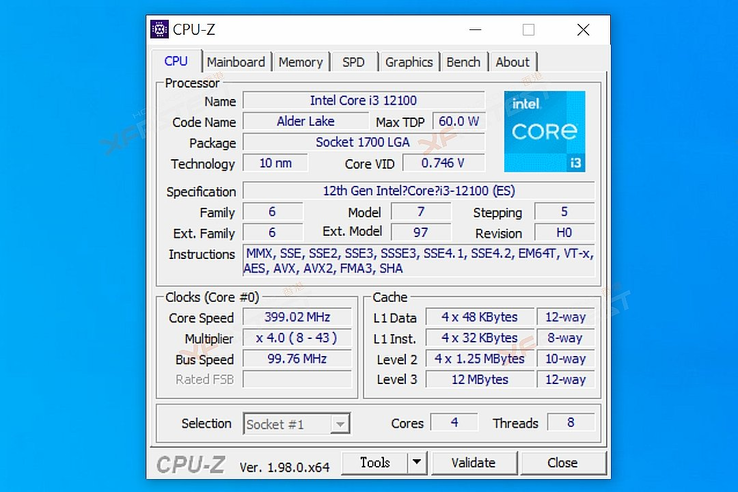 In Cinebench R23, the Core i3-12100 is about 25% and 40% more powerful than the 3300X and 3100, respectively. The gap isn’t quite as large when it comes to gaming, but it still exists and is, therefore, worth mentioning. The same goes for video-related workloads (PugetBench for Premiere Pro, in this case) where the Alder Lake CPU had a 30% lead in real-time video playback and a whopping 80% decrease in exporting times — a difference that is by on means negligible!

So, if it’s a budget-friendly build you’re after, Intel’s entry-level Alder Lake processors might be the way to go. Then again, affordable LGA 1700 motherboards still haven’t hit the market so it’s best to just reserve judgement and await official prices and real-world benchmarks before coming to any conclusions.