With a few notable exceptions, the world’s Top 16 has made it to the main bracket of IEM Cologne. OG were the only ones unable to fight through the Play-Ins.

An overtime loss to Renegades meant that OG weren’t going to participate in the Group Stage of the Intel Extreme Masters. This was a huge disappointment to the team, especially since they had gained so much confidence after their recent bootcamps. This showed in the tournament results as well, but now they have to ask themselves whether the players can actually deliver in a LAN environment, or whether they only have confidence and mental strength in online matches.

The Ninjas had a different experience. They ran off with a quick 16-6 over LDLC and only required two maps to make it past mousesports as well. For both teams, this was the first offline tournament in their new team formations, but Nicolai “device” Reedtz and his men handled themselves better. The Dane put up a 1.35 rating and showed once again why Astralis depended so much on him. Even during this more than decisive 2-0 match, Linus “LNZ” Holtäng struggled to keep up. This might become an issue for the Ninjas in Pyjamas later on. It definitely goes to show that the academy player doesn’t have the experience to maintain his level on LAN.

It took Vitality quite a while to make it past Team Spirit in their Best-of-Three. On Dust2, the Russians managed to win the first map with a 16-14 scoreline. But Vitality fought back to score a 16-13 and tie the series again. On Nuke, the Frenchmen sealed the deal on a 16-12 scoreline, which was only made possible by a few clever clutches. They’re now progressing to the main portion of IEM Cologne.

Finn “karrigan” Andersen and his troops managed to win out in the duel between FaZe and EG. This is already a great achievement for the FaZe Clan, since their results were weak even after having time to adjust to their new roster. Their subsequent 2-0 over Complexity was even more of a success. Fans can now justifiably hope to see them make it further in the Group Stage. Russel “Twistzz” VanDulken might finally get the chance to prove his worth for the FaZe Clan.

BIG confidently made their way past Sprout and then fought through a closely contested match with OG. The OG players failed to cope with the pressure of overtime and conceded the series to the Germans after two maps. So BIG are heading to the Group Stage as well. After their players have put up great performances, they have a shot at making playoffs as well.

With the play-ins concluded, it's time for the main event. 🏆

Welcome to the Group Stage of #IEM Cologne! pic.twitter.com/aZn7pYqVTO

Even after they bombed out against FaZe, Complexity managed to get back on their feet. Team LDLC were no match. The same held true for mousesports and EG, where the former easily dispatched the latter. They’re now getting to experience the IEM Cologne Groups as well. Unlike during their Best-of-Three versus Vitality, where Spirit narrowly lost out, they got to hand a similarly close defeat to Sprout. The 16-13 scoreline on the last map underlines how much these teams were actually on par with one another.

So the winners of the Lower Bracket have eventually made the jump to the main portion of the event. However, their seeding has suffered massively. This means that they now have to contend with the frontrunners of IEM Cologne. The likes of Gambit and Natus Vincere are already patiently lying in wait to take on these weaker teams.

THE BEST PLAYERS OF THE PLAY-INS

There is a clear difference to be seen between the veterans and the young stars in these player rankings. Newcomers like Jayson “Kjoyin” Nguyen-Van or LNZ have placed towards the lower end of the standings, even though their teams made it through the Play-Ins – in the case of NiP, it was a dominant showing! Even players like Mateusz “mantuu” Wilczewski failed to perform as usual. 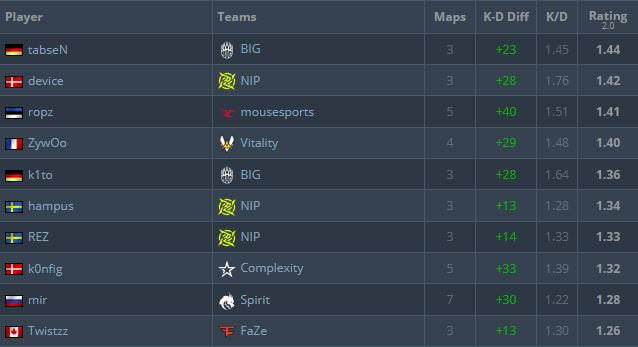 The best players of the IEM Cologne Play-Ins (via HLTV)

This just goes to show that LAN tournaments being on pause for the past 15 months has made a difference. Even though mantuu has 1.5 years of experience playing at the top, this was one of the first LANs where he had to measure up to this level of teams. In terms of offline playing time, he is still a relative newcomer.

On the other side of the standings, Johannes “tabseN” Wodarz and Robin “ropz” Kool didn’t feel the struggle at all. Alongside device and Mathieu “ZywOo” Herbaut, they make up the top of the player rankings. Each one of them has attained a rating of 1.40 or better. Of course, the Play-Ins level of competition isn’t comparable to what awaits them in the main bracket. Nonetheless, the usual LAN performers seem to be in top form.

Granted, IEM Cologne is the first offline event in 15 months. Even proven veterans should feel some level of stage fright. Each and every player will need some time to get back into the groove of LAN tournaments. So the results from teams like OG aren’t a sign of impending doom. Only if they fail to improve at the upcoming tournaments should they really be worried.

The Group Stage of IEM Cologne is bound to kick off shortly. Before the playoffs, commence, teams and players will get a short break and we will have time to process all the matches that have taken place so far. Until then, two Double Elimination groups will provide us with action and will grant the teams three playoffs spots each. The Favorites of DreamHack Masters Spring 2021