There are many keyboards out there, but wireless ones (regardless if they’re intended for gaming or not) have a special kind of allure. Of course, that kind of “exotic” vibe comes at a cost — and it’s often far too great to stomach. Simply put, wireless keyboards don’t come cheap. Heck, we’re putting it mildly here. In fact, they’re pretty much “reserved” for those whose pockets run a bit deeper. Then again, wireless keyboards are somewhat of a luxury item, so it’s only natural that they come at a premium.

As for functionality, they don’t offer anything overly unique. For most people, removing the cord isn’t that big of a deal. That’s pretty much the biggest reason why wireless keyboards haven’t caught on yet. Still, by removing the cord from the equation, these keyboards invariably pave way to wireless connectivity — and multiple types of it, too. That, in short, is a huge benefit, even though most folks don’t really need it.

When it comes to usability, they’re still the same keyboards we all know and love, minus that pesky wiring. Wireless models don’t improve your gameplay nor do they augment your actual workflow. Still, if you have a bit of money to spare, they’re quite a nice thing to have, and they’re often beautiful from a design standpoint as well. Pair one such model with an equally attractive mouse, and you got yourself a slick wireless set-up that’s a joy to use on the daily.

So, with that out of the way, let’s focus on the best wireless keyboards on the market!

Logitech MX Keys — If you’re after the perfect all-around wireless keyboard, then look no further than Logitech’s stellar MX Keys. Impeccable design, fantastic build quality, long-lasting battery life, and the ability to connect to up to three separate devices — what more could you ask for?

Its keys are also spherically dished in order to match the shape of your fingertips, ensuring satisfying feedback with each separate keystroke. It’s pretty darn silent, too, with a remarkably solid build. It also comes with adjustable backlighting (for whenever you need to burn the midnight oil). Logitech even went a step further and imbued the MX Keys with a nifty proximity sensor that’ll detect your hands and illuminate the keyboard the moment your fingers approach. It charges through a USB-C port, can last up to 10 days on a full charge (or a whopping 5 months without any backlighting), and works seamlessly with Windows, macOS, Linux, iOS, and Android.

So regardless of the operating system or device, you’ll be good to go. And at just $99.99, it’s quite a steal, too! Whether it’s “worth it” or not will depend on your use-case (and budget), but it’s definitely on the cheaper side as far as wireless keyboards go.

Logitech G915 — Logitech’s G915 is an absolute stunner, although its dazzling looks come at a cost: $249.99. That, in short, is quite a bitter pill to swallow. Still, if you have the money, then it’s undoubtedly one of the best wireless keyboards out there — regardless if you’re the office type of user or a hardcore gamer. In fact, it’s more geared towards the latter, with low profile mechanical switches, ample RGB, and Logitech’s pro-grade LIGHTSPEED wireless technology. It is stunning by design, comes at just 22mm thin, and is an absolute pleasure to both use and look at. Oh, and it packs Bluetooth connectivity as well, in case you ever want to pair it with your phone or tablet.

You can purchase the G915 in either black or white, with three vastly different switch types to choose from (GL Clicky, GL Tactile, GL Linear). And, in case you don’t want that pesky numpad, you can purchase it as a TKL model as well!

If you’re after the best wireless keyboard out there (for both work and play), then look no further than the G915!

Razer Pro Type — This model is relatively new which is why most people don’t even know it exists. Then again, Razer isn’t advertising it all that often — it’s not exactly geared towards gamers which, of course, is their target demographic. That aside, it’s an absolutely stellar wireless keyboard, especially for productivity and office-type work.

It comes with Razer’s mechanical switches (Orange ones, factory lubricated), both Bluetooth and Wireless connectivity (with up to four devices), a beautiful ergonomic design with keycaps lined with a fingerprint-resistant, soft-touch coating, and a stunning white backlight that’ll make this keyboard stand out in nearly any kind of set-up. It’s truly a sight to behold, although it is a bit more chunky when compared to certain other models on this list.

Still, at $129.99, it won’t break the bank and has more than enough features for the average consumer. If you’re after a wireless keyboard that can do double duty for both office work and gaming (without breaking the bank), then look no further than Razer’s Pro Type! 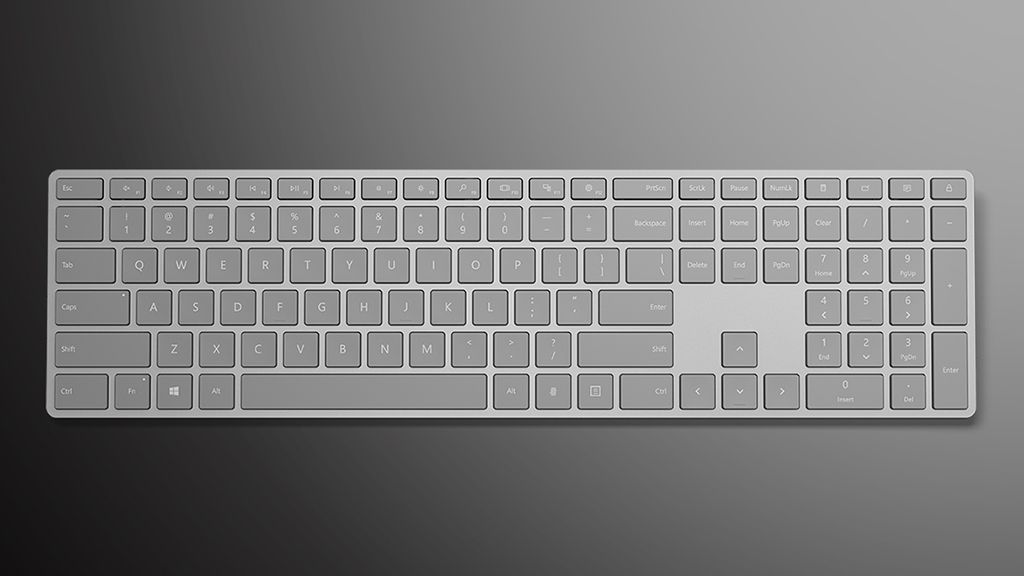 Microsoft Modern Keyboard — If you’re into the whole Apple aesthetic (and don’t want any gamery vibes whatsoever), then Microsoft’s Modern Keyboard might be the way to go! It comes with a robust aluminum frame, a full set of keys (that are a joy to type on), Bluetooth pairing (but no multi-device support), and even a built-in fingerprint sensor — in case you want to add biometric security to your set-up!

Its price, however, isn’t that easy to stomach: $129.99. Now, it’s by no means the most expensive keyboard on this list, but other than looking great, it doesn’t have any standout features whatsoever. There’s no backlighting which, to be frank, is quite a big omission at this price point. If you’re super into minimalism, then sure — it’s one of the most attractive keyboards out there, but it’s far from a good choice if you’re after the most bang for your buck.

The wireless keyboards listed above are all great in one way or another. Still, there’s a handful of other keyboards out there on the market that deserve an honorable mention as well. They might not be the crème de la crème, but sometimes you just need an easy-to-use, run-of-the-mill kind of device that’ll get the job done. Or, conversely, something very unique that’ll satisfy an equally specific niche.

Logitech K380 — If you’re after a no-frills wireless keyboard, a device that is void of any superfluous add-ons and embellishments, then the K380 definitely deserves a mention. It’s stupendously small, light, and portable — the perfect keyboard for those on-the-go! The only downside (or advantage, depending on your use-case) is that it’s Bluetooth only. Still, it can connect to three separate devices and runs on standard AAA alkaline batteries. And at just $39.99, it won’t leave that big of a mark on your wallet either!

Corsair K83 Wireless Entertainment Keyboard — This is an all-in-one kind of solution for your living room. It comes with an intuitive joystick, a touchpad (with full gesture control), backlighting, dedicated media buttons, both 2.4 Ghz and Bluetooth connectivity, and a fairly acceptable price tag: $99.99. Overall, a very slick, well-rounded package!

As mentioned above, wireless keyboards aren’t a necessity. In fact, they’re far from it. Still, the connectivity they provide cannot be found anywhere else, and that is precisely why they’re often worth the high asking price. Plus, they come in various different shapes and sizes, and are the perfect traveling companions. There are even a couple of ’em that can help you get your work done, and then help satisfy that gaming itch — without ever compromising on performance. It’s a two-for-one kind of deal! A great option to go for if you’re looking to game a bit on the side!