AMD Ryzen 5000 processors have started shipping! That, in itself, is hugely exciting, even if you aren’t looking for a CPU right this instant. Why, you might ask? Well, simply put, this is an incredibly important moment in which the AMD takeover is finally complete. With this series of CPUs, they’ve overtaken Intel in every way, shape, and form. They have processors that are more powerful, more energy efficient, they run cooler, they’re better for gaming and intensive workloads (rendering, modeling, etc.), and they’re cheaper as well.

There’s really no downside whatsoever. Now, granted, they aren’t cheap by any stretch of the imagination, but you’re definitely getting insane bang for your buck. Right now, at the time of this writing, there’s still no budget-friendly option from AMD, but that’s bound to change in a couple of weeks’ time as well.

For all intents and purposes, this is a massive leap forward. 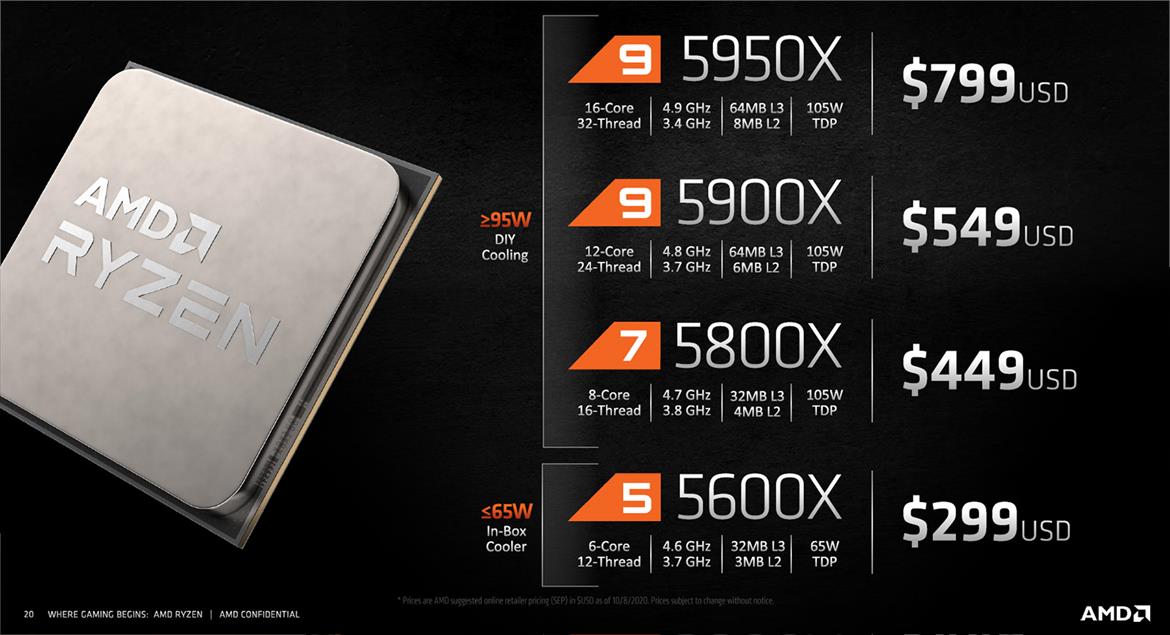 Something for (nearly) everyone!

First of all, notice the X at the end. These processors are mostly geared towards prosumers — folks who really need the most power they can get. So we have the Ryzen 5 5600X (6 cores, 12 threads) that’ll retail for $299. It’s a noticeable step up over the Ryzen 5 3600 performance-wise, but it’s not exactly a budget-oriented purchase. In any case, if you already have a solid CPU, this one won’t be that good of a buy. (although it still benchmarks insanely well) The Ryzen 7 5800X, however, is an absolute beast. Eight cores, sixteen threads, maximum boost frequency of 4.7 Ghz, all at a measly 105W TDP. It’s not cheap, mind you, but if you’re a creative professional, it’ll get the job done with ease.

If you make a living doing any kind of 3D work (and really want to maximize and speed up your workflow), then the 5900X and 5950X are the way to go. Of course, they’re devilishly expensive, but they’re still far cheaper than anything Intel has to offer. Sixteen cores and thirty-two threads with a mind-blowing 64MB L3 cache and a boost clock of 4.9 Ghz.

That’s obscenely fast. Heck, it’s faster than most creative professionals need! Still, for what it does and what it packs underneath the hood, it’s actually “cheap.” Of course, that’s a very relative term, but you get the point.

In fact, it’s the fastest processor you can buy for a mainstream motherboard socket. The Intel i9-10900K is still a beast, but it’s more expensive, has fewer cores/threads, less cache, and can easily draw up to 250W when pushed to its limit. That’s literally twice than what they’re advertising (125W). Not exactly efficient, as you can imagine. AMD processors, at the time of this writing, are the only processors you should buy.

Now, of course, if you’re strictly looking to play esports titles, then the AMD Ryzen 5000 series of processors is definitely overkill. Heck, maybe that’s even an understatement. It’s like driving a Ferrari to your local supermarket. You can do it, but it makes no sense whatsoever. If, however, you’re after the most frames and the best possible performance, it’s definitely the way to go. This luxury will definitely cost you quite a bit, but it’s well worth the asking price.

These processors will excel in every possible scenario. Single-core workloads? They’ll chew through ’em like it’s nothing. Multi-core workloads? They won’t break a sweat. That’s what you get when you combine a cutting-edge manufacturing process with a ton of technical ingenuity.

AMD has revolutionized the CPU market in just a couple of years and watching them pull it off has been an absolute treat. If, perhaps, you’re looking for something a bit more affordable (and let’s not kid ourselves, these are quite expensive), you’ll be happy to find out that AMD is planning a slew of processors for Q1 2021 that’ll retail for far less, so stay tuned!